Last couple weeks together with a colleague we have been investigating an issue regarding audio in a Citrix Virtual Desktop environment. For some reason the volume of the audio resets to 100% resulting in unexpected loud sounds. This blog post will explain the what we have found so far regarding this issue.

Context of the audio issue

In order to understand the issue itself it is important to have the correct context. This is happening in a Citrix Virtual Desktop environment running version 1811 with Windows 10 1803 as the default operating system. There are multiple AudioEndpoint devices for which we noticed some weird behaviour. In most cases a ThinClient is used running Windows 10 LTSC which is connected to 2 monitors . These monitors have built-in speakers which are default set as primary audio device. Users with a personal device mostly work while connected through a port replicator like the Fujitsu Display Link or the HP Universal USB-C Dock. These port replicators are also connected to 2 monitors with built-in speakers. Users with a personal device have the ability to switch between default audio devices.

When does the audio issue occur?

There are two primary situations in which the audio resets to a 100% volume level. When the user locks the connecting device when working on a laptop or ThinClient, both displays will go into standby after a couple minutes because of Power saving settings. When the user unlocks the device the volume is reset to a 100%. While the local client is Locked, the Citrix session remains active and running on the background, so there is no disconnect or reconnect tacking place. This also happens when taking over a session from another device. When I have a session open on my personal device and take it over from a ThinClient, the audio will be reset at a 100%.

When a user reconnects to a XenApp session, all playback audio devices are reset to 100% volume level. Any playback volume settings previously made in the session are lost. This may also happen with a XenDesktop session. This tool restores the volume settings from values stored in the registry.

Looking at the description this tool should have solved the described issue. But since we do not reconnect to the Citrix session the tool doesn’t work, since it will not be triggered, which it requires to fix the volume level. This means the tool will not solve this issue.

What’s happening under the hood

As this was impacting a majority of the users we both investigated this issue and found some weird behaviour:

The output will list all active audio devices including the unique instance id. This can also be run within the VDI session and should list a similar list. When switching between the personal device and ThinClient we noticed that for some reason the unique instance ID of the device is re-used when switching between (re-)connected devices and/or when changing the default audio device. 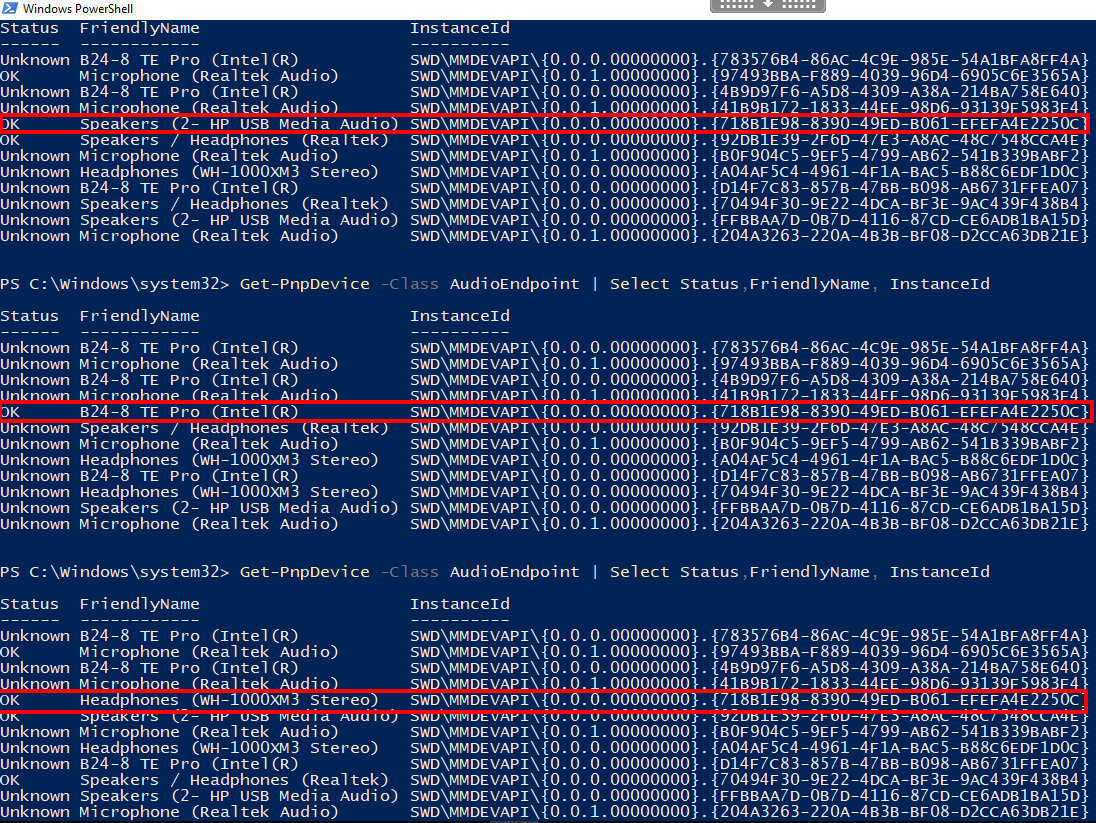 At this point we are unsure if this is issue is caused by the Citrix VDA or a bug in the Windows Core Audio API.

When the monitors are in power saving mode the Audio Device is disconnected. When monitors wake up and are registered again, Audio Volume levels for the primary device are reset back to the default volume because it is provided with a new Guid.

Instance IDs of an audio device should always be unique and for some reason this is not the case in a Citrix session. Instance ID’s are swapped, and already known devices are not properly identified and are thus provided with new Instance IDs!

Unfortunately there is no solution yet. The tool that is published by Citrix does not apply to this specific scenario as there are no disconnect and reconnect actions to trigger the tool. At this customer we did develop a specific tool that keeps track of all the changes regarding volume and default device change. This way we have the possibility to restore the volume based on previously saved volume levels for known devices.

Big credits to Wesly van Straten (RawWorks) as he has lead the investigation.

Are you running into the same issues and could you use a tool that solves this? Please let us know in the comments below.

Photo by Lee Campbell on Unsplash